Here is our usual monthly list of the top 10 read articles on shrewdcookie.com in September – there are some surprising entries!

The changes announced in the Budget in respect of increases in the ISA allowances come into effect on 6th October for those over age 50 before the end of the current tax year – can invest up to £10,200 into a Stocks and Shares ISA. Woo hoo!!!

I have put together a great little yearplanner for 2010 – it can be downloaded in A4 (landscape) or larger A3 (printed on 2 sheets of A4 for those without an A3 sized printer!). Feel free to send copies to friends, family and colleagues at work.

With the start of the University/College/School term upon us here is a great article which might help a few students who are struggling through on their limited finances.

One of the first principles spoken of in the great book “The Richest Man in Babylon” is the need to pay yourself first – the principle here is to take a fixed percentage off your take-home pay and keep that money for yourself forever – then your lifestyle will change itself to allow you to live on the remainder. Get a copy of this book – a truly great read. It could be the most valuable £4.99 you ever invest!

Here is a really helpful little spreadsheet which will allow you to plan your income and expenditure on a monthly basis – you will be able to see exactly where your money goes to each month – allowing you to make changes in your expenditure – a great tool for “what if” scenarios – what if I stopped eating out, what if I increased income by £200 per month etc.

Those people who will be over 50 before 5th April 2010 and were planning to retire in the next 5 years may have to take some urgent action between now and then – in the worst case scenario you may have to continue working for another 5 years!

8. Wear a uniform to work – here’s some free money!

If you have to wash your own work uniform you could be entitled to some money from the taxman – read the article for more information.

9. Get Money for your Old Mobile Phone

Did you know you can sell old mobile phones – I recently sold my old Sony Ericsson K800i and got £28 for it – worth checking out what yours might get you – see the article.

Everyone needs and should have a Will – it saves so many problems in the event of your death – and let’s face it the only two certainties in life are death and taxes! Read the article now – you might be surprised.

Be sure to subscribe to our newsletter – it’s free and you can cancel it at any time.

Also – did you know you can receive our blog posts via RSS. 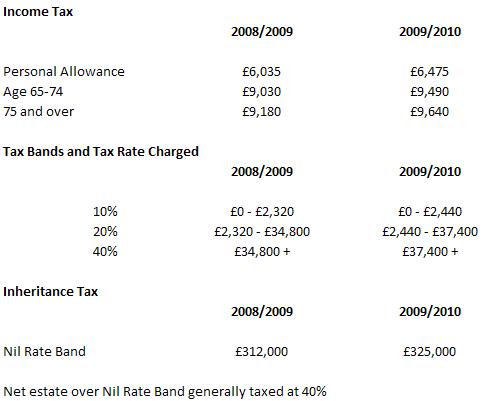 In this second part of a three part series we will consider the main allowances and reliefs which can be used to reduce your liability to Inheritance Tax.

In the previous article we discussed that recent changes in legislation entitled a married couple to pass on any proportion of unused Nil Rate Band to the surviving spouse on first death.

Under this exemption, all transfers between spouses and civil partners, as long as they have a permanent home in the UK, are exempt from Inheritance Tax.

Certain gifts are exempt from IHT, regardless of whether they are made during the donor’s lifetime or as a result of a gift through their Will on death: –

Any individual can make a gift of up to £3,000 in any tax year which is free from Inheritance Tax. Any unused relief can be carried forward for just one tax year.

Some gifts made during lifetime are exempt from Inheritance Tax and they are detailed below:-

Gifts on marriage or entering a Civil Partnership

Any individual can make a gift during lifetime to any other individual up to £250 and not be liable to Inheritance Tax.

Gifts out of Normal Expenditure

Any regular gifts made out of net income (i.e. after tax has been paid) are free from Inheritance Tax. These can include regular gifts to someone – e.g. christmas presents, premiums on a life insurance policy or other regular or monthly payments to another person.

In order for this relief to work, the gift must be made out of normal expenditure and not be so high as to affect the donor’s standard of living in that they have to access their own capital to make good any shortfall in maintaining their standard of living.

Any gifts made to individuals will be exempt as long as there is a period of seven years between the date of the gift and the date of death.

If you die within seven years, and the value of the gifts exceeds the nil rate band, then IHT may be due on the gift. It would be the recipient’s responsibility to pay the IHT due on this gift.

If the value of the gifts is in excess of the Nil Rate band then “taper relief” may apply. HMRC give more information on taper relief here.

Gifts for Maintenance of the Family

Any lifetime gift for the maintenance of the spouse, child or a dependent relative may be exempt from tax as long as the gift is used for maintenance, education or training up to the age of 18, or to the end of full-time education if this is at a later date.

Other Reliefs – to be covered later

Other reliefs are available in respect of businesses, woodland, heritage and farmland – these reliefs will be covered in more depth at a later date.

As with any issue relating to taxation, rules can and do change on a regular basis. Please ensure you take advice from a suitably qualified accountant or solicitor in respect of Inheritance Tax and the allowances and reliefs your own personal estate may enjoy.